When I got to the end of the County Route 539 at South Green Street Park on the Manahawkin Bay, I was certain I rode the full length of the route. “Finally” I thought to myself.

Wrong. Later when I returned home and checked my stats on Rever, I realized that I actually skipped 11.6 miles of the 56.7 miles in the North. What was I thinking? Later, while checking the maps, Google Maps being the main offender, I see that those 11.6 miles pass through the town of Hightstown and Cranbury.  While Cranbury, north of Hightstown, is rural with industrial warehouses splattered around, Hightstown is a very old town with quaint little shops and plenty of old homes to give you that Mayberry feeling. North beyond Cranbury, 539 intersects the less hospitable Route 130. Oddly enough, the two routes cross each other south of Hightstown. There is an argument here however. Though Google Maps shows 539 continuing and eventually meeting back up with Route 130, other sources, such as Wikipedia, claim that the northern terminus of 539 is actually the first intersection with Route 130 south of Hightstown and not just north of Cranbury.

I happen to agree with Google Maps.

While I have done the lower half of Route 539 several time by motorcycle, I have also done it 12 times by bicycle during the MS Coast the Coast cycling event, I have never done the northern part. When I say “Northern” I mean the section north of the intersection of County Route 524 & 539.

From that point south, I got the T-shirt. I really like that part and you would too. The Southern end, again debatable, it is said to end at the intersection of Route 9. I believe the actual end to be at South Green Street Park since that road is a continuation, in my twisted mind, of 539. I mean really, just past the that intersection, the road keeps going. Sooooo….. why shouldn’t the designation.

It’s a pet peeve of mine. Like when roads change names at some random point: End Route “A”, Begin Route “B”.  No… just no. That’s just too dumb…. makes my hair hurt.

But Route 539 is glorious in the southern sections and although I have ridden it dozens of times, I will continue to ride it. It is also the gateway route to the Pine Barrens of South Jersey. There are a few turn-offs towards the end of 539 that will bring you deeper into the pine forest and let me tell you, the smell is awesome. At one point, you even get the smell of the ocean and the smell of the pines. What’s even cooler, there is one Roadside America attraction on this route and 4 others nearby. You’ll have to find those yourself. 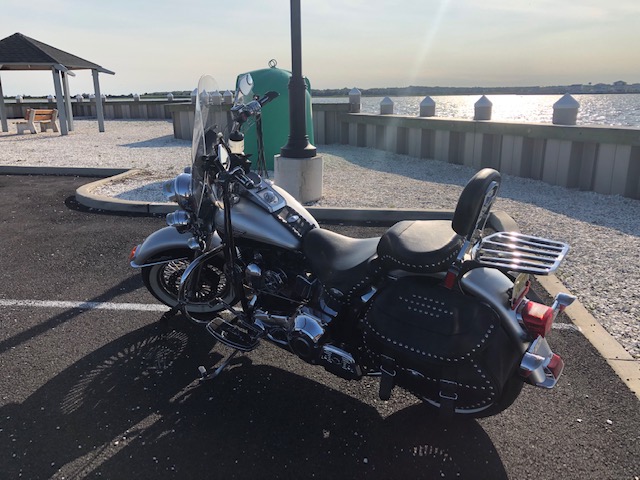 When you’re done at the “end”, head back north up to Route 9 and there on the corner is a Dunkin Donuts and a WaWa. Make a left and go about 500 feet and you have the entrance to Tuckerton Seaport, a little village of shops and eateries on the waterfront to take your money.  But it’s really a nice place.

As for me, well, I stop and have lunch/snack at the same place most of us riders stop to have lunch when the stomach calls and we always have a table waiting.

Where do you have lunch?