As you recall, I was trying to come to a solution for getting my motorcycle inside some sort of structure so that it is not exposed to the elements. Now although my beloved Harley is covered, that still does not make it free from moisture, dampness, cold, etc. etc. as I stated in the last blog entry, I spoke with the knucklehead at the municipal building department and he told me that if I wanted to build a structure like a shed, I would have to get an architect involved. For a stinkin’ shed! Give this to say, I abandon that idea.

A week or so later, my wife is browsing eBay, like she usually does. And she pointed out one of these canvas type Sheds. In this particular case, it was made by shelter logic. Now it’s one of those jobs that has a zipper front door, no windows usually gray or silver or brown and made of some floppy kind of fabric. Such as vinyl. Well, the relatively inexpensive usually less than $500 for a 10 x 10.
“What about one of these?” She said.
“I don’t know, it’s not a constructed structure. I don’t know why I would need a permit for that. Just to be on the safe side, let me call the town and find out.”
So the next day, I called the knucklehead back at the municipal building department. And his reply was “sure you can put one of those in your driveway, but you’ll still need to use variance permit.” To which I replied, “am I going to need an architect for this one too?” There was a short bit of silence, and then he said in a rather drive a monotone voice, “no, you will not need an architect, just come get the permit.”
Fast forward a week and I now have a “permit” to put a non-structural fabric shelter in my driveway. So I begin….
Step 1: Platform.
No sense in putting my bike in a shelter if it’s still going to get wet when it rains. And, on advice from someone who has one of these Shelter Logic sheds, attach it to something or it will blow away the first time it gets windy. 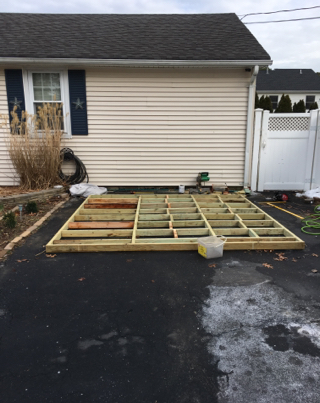 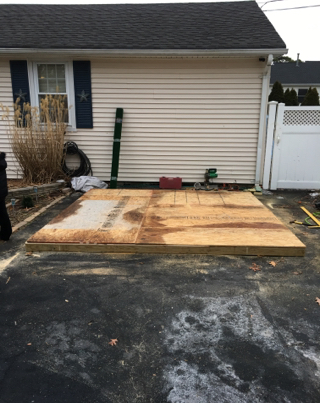